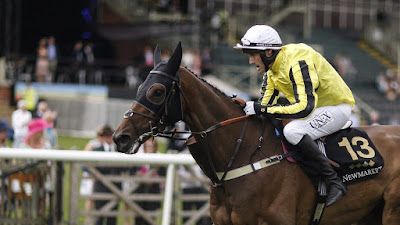 For starters, I can't see too much of interest. However, most of my opinions, today, will be made by the betting markets.

This looks a very open-ended affair.

Sea The Shells has claims.

Rain Guage ran well enough on debut and could go well here although James Tate's horses on their second start don't, in general, have the best strike rate.

I'm not sure what to think of Tom Clover's The Guvnor, in the ownership of The Rogues Gallery. This son of Frankel wasn't the most expensive and I'm sure connections expected more on debut. However, he was struggling after a slow start and just couldn't get to the pack and never involved. I would suspect better will be seen today although an even greater trip would be a positive. Could well run a big race and not a bad price but one of those horses you just can't quite get to grips with. May prove a mistake not betting but I don't like taking too much of a gamble and after looking very inexperienced on debut there is a chance he will need this second start. In addition, it is a slight negative that Jack Mitchell is riding stablemate Rogue Force who heads to Kempton (4:45).

A couple of outsiders may hold some claims but they are dependent on market moves.

Act Naturally, for Simon & Ed Crisford may have a chance but would need to be backed. She ran well for a long way on debut but tired rapidly after being slightly hampered. This drop down in distance will help and fitness should be better today. I wouldn't bet on this horse unless fancied in the market. Difficult to know what to think in ways. Time will tell.

It's a similar story with Hugo Palmer's Contessa, who went to the sales and wasn't sold for $360,000. A hefty sum of money which indicates a horse better than seen on debut. She definitely needed the run and looked quite limited that day. Horses can be transformed from first to second start so you just never know what to expect. Another horse that could go well but would need to be supported in the market.

Rumi, trained by Roger Charlton, could be a better this time out. There was money for this three-year-old last time out but it was a lacklustre effort. May run well today but you need a leap of faith because it wasn't the most sparkling performance.

In conclusion: This looks a difficult race to assess. The favourites are most likely to run well. The Guvnor, Act Naturally, Countessa and Rumi could spring a surprise at odds. A few of these horses have negative jockey booking or slight queries. I would like to see money for some of these to bring them into the reckoning. Unless you want to take a punt you will need to see money. I would have to wait until near the off to have a better idea.

Rogue Force looks a live chance and could be a fair each-way bet if prices allow. It is encouraging to see Jack Mitchell take this ride in favour of The Guvnor.

Join the competition by invitation only.

Leave your racing tips here in the comments box.

Bloody Good Winner has the final say without discussion.